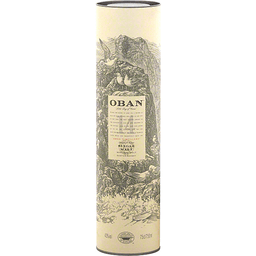 Little bay of caves. Along the shores of lorn lies a record of man far more ancient than that of any city in the land, the first settlers arrived on the mainland in 5,000 BC and sheltered in the natural caves of the land then known as an OB. The distillery cave was one such shelter hidden in the Creag A Bharrain cliffs which rise dramatically above the rest. Producers of a delicate single malt. West Highland Malt Scotch Whisky. Oban the distillery is at the heart of Oban - Gateway to the isles. In effect the town grew up around the distillery, founded by John and Hugh Stevenson in 1794. Obans attractive West Highland character reflects its location, revealing aspects of both the highland and the Island styles. Elegant and glowing, it marries the sea air character of the Island malts to the soft, richly fruity style of the Highlands, creating its own rich tasting West Highland malt. The stills here are among the smallest in Scotland. The cramped nature of the site places severe limits on production, which in turn means that demand fir Obans richly appreciated malt is always likely to exceed supply. Few malts were ever made in the Western Highland and only two now remain. Oban, like its home, remains their capital. Oban is the unforgettable West Highland destination on a journey around Scotland's six malt whisky making regions.