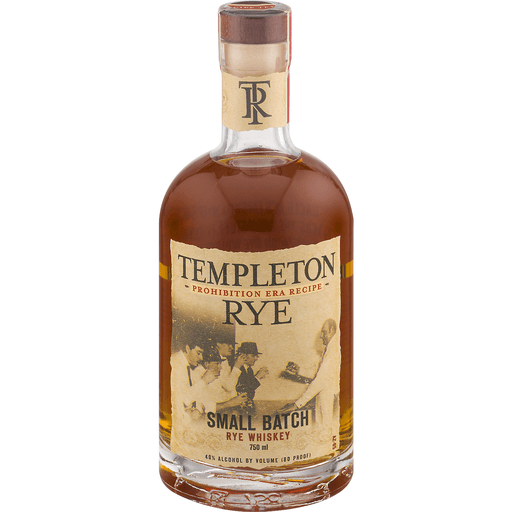 Aged 6 years. The good stuff. Uncle Al's favorite whiskey was the good stuff - Templeton Rye Whiskey. - Deirdre Marie Capone. When prohibition outlawed the manufacture and sale of alcoholic beverages in 1920, many enterprising residents of a small town in Iowa chose to become outlaws - producing a high-caliber and much sought-after whiskey known as Templeton Rye, of the good stuff to those in the know. Alphonse Kerkhoff was one of those Templeton outlaws. Over the course of its storied history, Templeton Rye became Al Capone's whiskey of choice, quickly finding its way to the center of his bootlegging empire. Legend suggests that a few bottles even found their way inside the walls of Alcatraz to the cell of prisoner AZ-85. This bottle of Templeton Rye is based on the original prohibition era Kerkhoff recipe. It was aged in charred new oak barrels for a smooth finish - and a clean getaway. Greetings from Templeton. God bless America. Visit us at templetonrye.com. Based on the prohibition era Kerkhoff recipe. 45.75% alcohol by volume (91.5 proof). Distilled in Indiana.